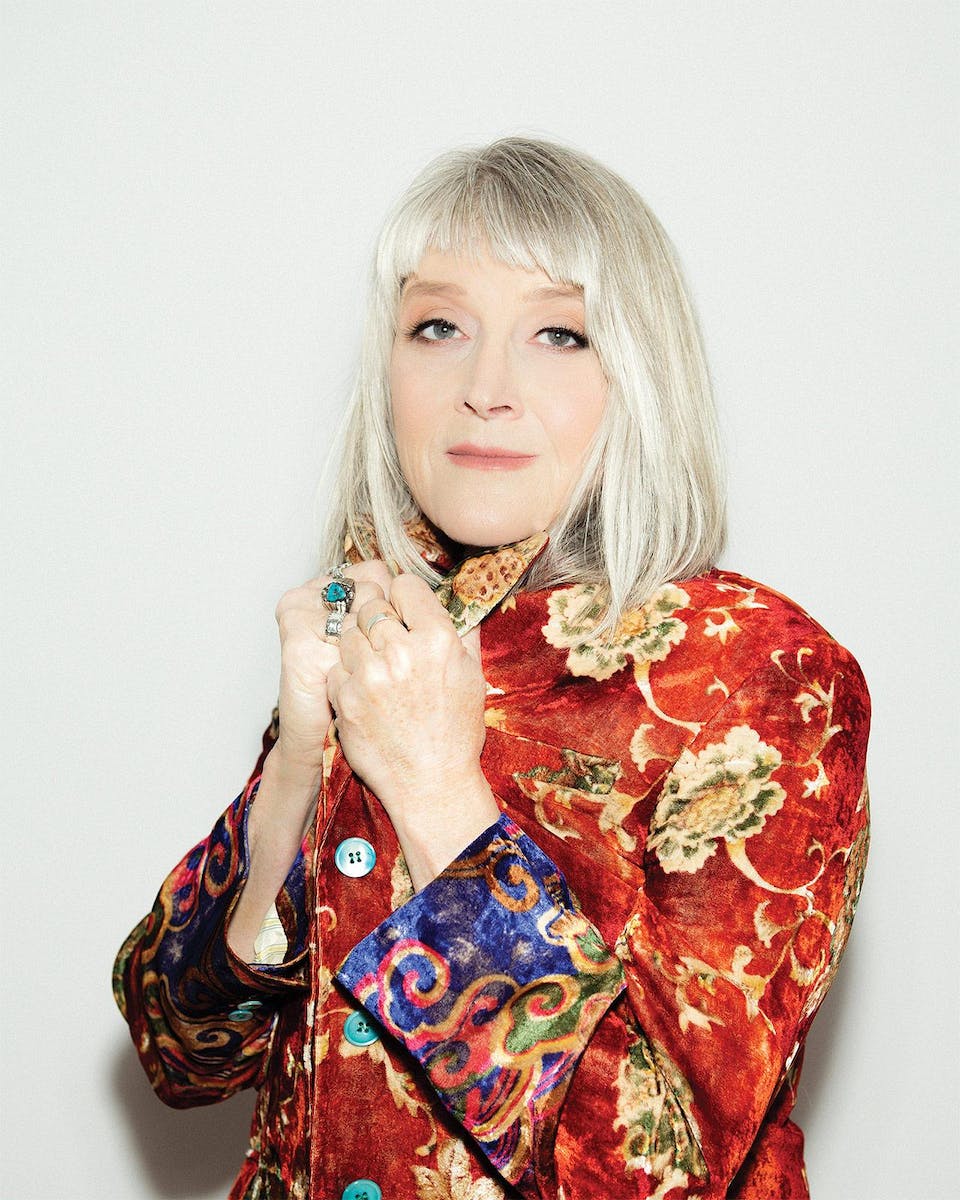 Edgeland moves roots singer/subtle excavator of the human condition Kim Richey through the topography of the life lived by a woman committed to following her music. Flinching over hurting another, knowing the ways of the road, seeking higher ground and accepting the fact everyone’s truth isn’t a white picket fence, she continues defying labels as she defines the thinking person’s life.

“Right now, my stuff is all in storage,” she says of her state of constant motion. “I’ve lived in a lot of different places – different countries even. It’s a little overwhelming, keeping track of stuff, but it’s been an amazing trip because music has taken me places I never dreamed.

“I’m the same way with writing. Even when I’ve finished a record, or am in the middle of recording, I’m writing. Writing songs is what I do; it’s how I connect with the world.”

That sense of motion infuses Edgeland with immediacy. From the Buck Owens/Don Rich opening notes of “Red Line,” the dusky blond sweeps listeners up in her whirl. If “Red Line” is a missed train and a moment of immersion in the station, “The Get Together” shimmers with a Laurel Canyon lushness and ease in the awkward (that evokes J.D. Souther’s post-romantic midtempos) and “Can’t Seem To Let You Go” owns the ‘60s Merseybeat pop luxury of the Seekers or Dusty Springfield in Memphis. Demonstrating a facility for slipping in and out of oeuvres and emotions, this – in many ways -- culminates her passage through music.

Kim Richey is a traveller, after all. Musically, physically, emotionally. Not merely restless or rootless, it’s who she is. Willing to follow where the music leads, she’s landed in Los Angeles, Nashville, London, working with a who’s who of producers – Richard Bennett, Hugh Padgham, Bill Bottrell, Angelo, Giles Martin. She’s attracted a coterie of top-shelf genre-definers -- Jason Isbell, Trisha Yearwood, Chuck Prophet, My Morning Jacket’s Carl Broemel, Wilco’s Pat Sansone – for her critically-lauded projects. She has also sung on records for Ryan Adams, Shawn Colvin, Isbell, and Rodney Crowell.

Part of what draws them to the dusky honey of her crystalline alto is the way she writes: to and from the soul, never flinching from the conflicts and crushing moments, yet always finding dignity and resilience. Her arc of the human heart is true. True enough that over the years, Richey’s been both Grammy nominated. Nominated for Yearwood’s truculently groove-country “Baby, I Lied,” she also co-wrote Radney Foster’s #1 “Nobody Wins.”

“Harlan Howard said – and maybe I’ve taken it too much to heart, ‘It’s always more believable if you sing it in the first person.’ And when I sit down to write, if it’s something I’m going to sing, I want it to be what I want it to be. I don’t really settle, which may make me a little hard to write with. But I have to be able to stand up and sing it night after night, and I can’t if I don’t really believe it.”

Those standards made Glimmer one of TIME’s Top Records of 1999 and Rise named People’s Best Alt-Country Record of 2002. Even when singing from the point of view of a guy working on a barge going up and down the Ohio River in “Dear John,” her aim is true. As she says of the man refusing to read the letter that ends his romance, “because if I don’t read your letter, then it’s not over. Sometimes these songs are specific and personal, but it’s also true in ways that reflect so many other people’s experience, too.”

Sometimes Richey channels profound truths. Sometimes she embraces breezy freedom. “Leavin’ Song,” a rambler’s shuffle, is more about tasting the world than exiting a bad situation. As its chorus offers, “This ain’t no leaving song, you ain’t done nothing wrong” over an electric banjo and Resonator guitar, Richey finds the sweet spot in exulting for just being alive.

Once again, Richey has drawn a multitude of collaborators who rival her own singular voice. Veteran journeymen artist/writers Chuck Prophet, Maendo Sanz, Mike Henderson (Steeldrivers), Bill Deasy (the Gathering Field), Pat McLaughlin (John Prine) and Al Anderson (NRBQ), plus Aussies Jenny Queen and Harry Hokey co-sign on these musical polaroids from the going, the leaving, and the pausing.

“I’ll be doing an interview, and people will say, ‘You co-write a lot…’,” she marvels, “like it’s a bad thing. But it’s inspiring to me, and takes me in other directions, to other places. The people I write with are funny, and smart, and a blast to hang out with, but they’re also really good writers in their own right. Nobody’s pandering or chasing ‘a hit,’ we’re all just trying to get to the best possible song.”

Whether growing up, owning and relinquishing high times in the sleek “Chase Wild Horses,” echoed in the ether-lite, percussive folk “High Time,” then jettisoned on the smoky acceptance of her own flawed inability to be in a romance on the Western-tinged on “I Tried,” the woman from Ohio makes our natural selves both exotic and homey.

Richey enlisted producer Brad Jones, known for Over the Rhine, Josh Rouse, Butterfly Boucher, Hayes Carll and Marshall Crenshaw, in crafting an adult album that evokes and provokes musically. “I wasn’t sure at first if we’d be a good combo because he has such strong opinions, and I do, too. But it was (laughter) the easiest record I’ve ever made. He has really different ideas, and it’s nice to have somebody push you in a direction you might not have gone – and have them respect your opinion, too. I really loved working with Brad.””

“So many of these guys produce and make records on their own,” she marvels. “I’m open to collaboration, too. These songs wouldn’t sound the way they do without these players.”

The noir-slink of “Pin A Rose,” a cautionary told-you-so tale of domestic abuse’s repeat cycles, the neo-madrigal “Not for Money or Love,” inspired by the father Richey lost at 2, and the Mellotron-tinged austerity of “Black Trees,” finished after a few years gestation during a residency at the Banff Centre for the Arts Colony and expanded to consider a refugee’s fortunes, all seek and explore. Here melody reinforces words, feelings, even interpersonal dynamics. Simplicity – as executed – breaks complicated things into evocative clouds that seep into the listeners unconscious.

“It’s a lot easier to say something in a song than in a conversation,” allows the easy-going grown-up. “And it’s not all about me, but the people in the songs. Even the stuff you leave out says something, so you’re creating on so many layers. And sometimes I don’t know where it comes from, just some other place.”

Listening to “Whistle On Occasion,” the Everly-esque closer duet with Prophet, Richey owns one’s place in the world. Here, there, going or gone, that’s all anyone can ask.