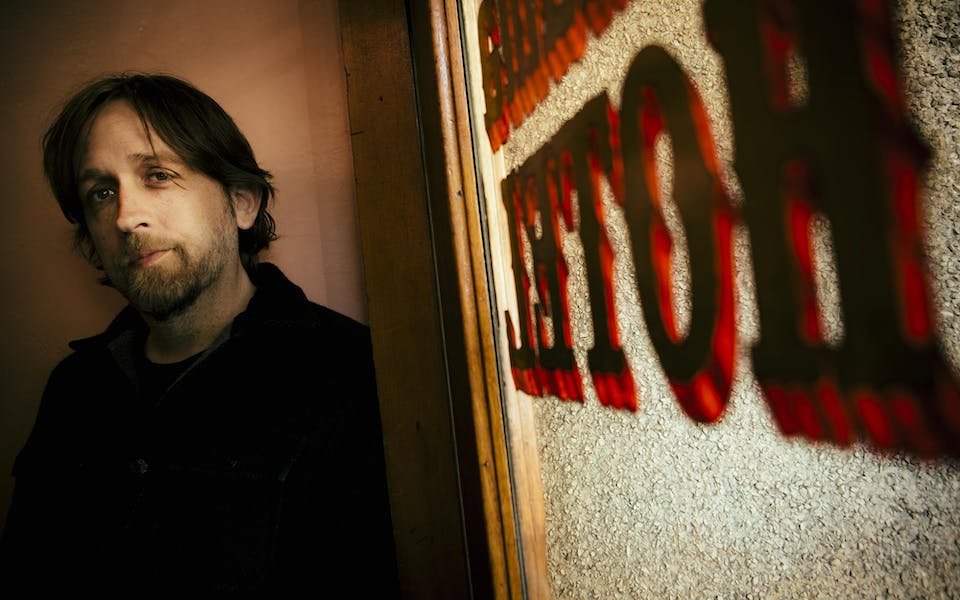 The chorus to the title track on the new Hayes Carll album, What It Is, is a manifesto.

What it was is gone forever / What it could be God only knows.

What it is is right here in front of me / and I’m not letting go.

He’s embracing the moment. Leaving the past where it belongs, accepting there’s no way to know what’s ahead, and challenging himself to be present in both love and life. It’s heady stuff. It also rocks.

With a career full of critical acclaim and popular success, Carll could’ve played it safe on this, his sixth record, but he didn’t. The result is a musically ambitious and lyrically deep statement of an artist in his creative prime.

Hayes Carll’s list of accomplishments is long. His third album, 2008’s Trouble In Mind, earned him an Americana Music Association Award for Song of the Year (for “She Left Me for Jesus”). The follow-up, KMAG YOYO was the most played album on the Americana Chart in 2011 and spawned covers by artists as varied as Hard Working Americans and Lee Ann Womack, whose version of “Chances Are” garnered Carll a Grammy nomination for Best Country Song. 2016’s Lovers and Leavers swept the Austin Music Awards, and was his fourth record in a row to reach #1 on the Americana Airplay chart. Kelly Willis and Kenny Chesney have chosen to record his songs and his television appearances include The Tonight Show, Austin City Limits, and Later w/Jools Holland. Carll is the rare artist who can rock a packed dancehall one night and hold a listening room at rapt attention the next.

“Repeating myself creatively would ultimately leave me empty. Covering new ground, exploring, and taking chances gives me juice and keeps me interested.”

He knew he wanted to find the next level. On What It Is, he clearly has.

It wasn’t necessarily easy to get there. Carll’s last release, 2016’s Lovers and Leavers was an artistic and commercial risk — a bold move which eschewed the tempo and humor of much of his previous work. The record revealed a more serious singer-songwriter dealing with more serious subjects — divorce, new love in the middle of life, parenting, the worth of work. What It Is finds him now on the other side, revived and happy, but resolute — no longer under the impression that any of it comes for free.

“I want to dig in so this life doesn’t just pass me by. The more engaged I am the more meaning it all has. I want that to be reflected in the work.”

And meaning there is. Carll sings “but I try because I want to,” on the album’s opening track, “None’Ya.” He’s not looking back lamenting love lost, rather, finding joy and purpose in the one he’s got and hanging on to the woman who sometimes leaves him delightedly scratching his head. “If I May Be So Bold,” finds him standing on similar ground — lyrically taking on the challenge of participating fully in life rather than discontentedly letting life happen.

There’s no wishy washy here and he’s not on the sidelines. In fact, he’s neck-deep in life. On the rambunctious, fiddle-punctuated, “Times Like These,” he laments political division in America while delivering a rapid-fire plea to “do my labor, love my girl, and help my neighbor, while keeping all my joie de vivre.” Carll’s signature cleverness and aptitude for so-personal-you-might-miss-it political commentary is as strong as ever. The stark, “Fragile Men,” co-written with singer-songwriter Lolo, uses humor and dripping sarcasm to examine his gender’s resistance to change in less than three minutes of string-laden, almost Jacques Brel invoking drama. It’s new musical territory for Carll, and the result is powerful. His voice is strong and resonant on these songs, and it’s thrilling to hear him use it with a new authority. He is alternately commanding and tender, yet always soulful.

Carll returned to trusted producer Brad Jones (producer of 2008’s Trouble in Mind and 2011’s KMAG YOYO) and Alex the Great Studio in Nashville, Tennessee, to record What It Is, and recruited singer-songwriter, author, and fiancee Allison Moorer as co-producer. The production is adventurous while keeping the focus on the singer and his songs and providing a path for him to go where he wants to go. Where that is, is forward.

That’s evident in the songwriting. Carll continues to hone his singular voice, but is also a flexible co-writer. Matraca Berg, Charlie Mars, Adam Landry, and Moorer have co-writing credits here, but it was Moorer’s inspiration that provided the largest impact.

“On the songwriting front she’s just a pro. She helps me cut through the noise and she does it with wit and style.”

Carll’s own wit and style has never been more evident. Whether it’s with the put-you-in-picture detail of, “Beautiful Thing,” the not quite sheepish enough, dude-esque defense of dishonesty in, “Things You Don’t Wanna Know,” or the strong as a tree trunk declaration of love on, “I Will Stay,” he displays an increasing command of his poetic lexicon.

Writers most often wrestle with experience and expectations, either romanticizing the past or telling us how good it’s going to be when they get where they’re going. What It Is is a record that is rooted solidly in the present, revealing an artist in the emotional and intellectual here and now.