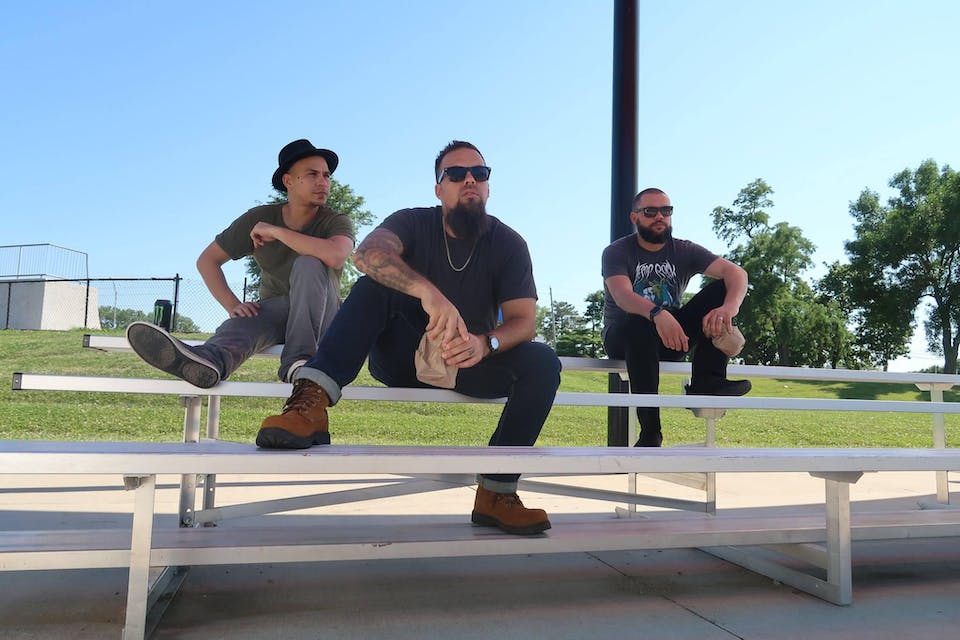 iCal
Google
¡Mayday! live at The Attic at Rock Brothers

They’ve performed with Lil Wayne, collaborated with Cee Lo Green and toured extensively with labelmate Tech N9ne. No matter whom they work with or who hears their music, ¡Mayday! quickly impresses whoever hears its diverse music and sees its riveting live show. So when it came time for Wrekonize (rapper), Bernz (rapper) and company to name its second Strange Music album, the group felt Believers best represented its progression for two reasons.

“When it comes to our sound, we have a lot of different things in it so a lot of times it’s hard to define, but the one common thread is that as soon as people hear it, they become Believers and it’s something that resonates with them,” Bernz says. “On a more esoteric level, we chose the title because we believe and the people we roll with believe that you ask the universe for things and you get them in return. You have to believe in what you want and believe it to achieve it.”

To this end, the Miami-based crew jumpstarts Believers with the energetic tag-team raps of Bernz and Wrekonize on the driving title track before delivering a rousing reggae-tinged declaration of their potency on “Shots Fired.” “We try to start our albums with a bang,” Bernz says. “It’s our time to become the group that everybody wants us to be. ‘Shots Fired’ is us claiming our spot. We feel like we put out great music and that our sound could appeal to a lot of people.”

¡Mayday! takes a more introspective stance on “Unplug.” On this collaboration with Kardinal Offishall, Bernz and Wrekonize examine the ways our lives are affected by how we connect to people and to technology. “On our last couple albums, we’ve touched on social media and the way it’s affecting us on a personal level,” Bernz says. “This is another swing of the bat at that. We all sit at restaurants with our friends and look at our phones. They say we’re all becoming more connected, but the question arises if we really are.”

People enter and exit our lives at a remarkable rate. This isn’t lost on ¡Mayday!, who uses the apocalyptic “Last One Standing” to send a note to their friends -- and to people in general -- who abandon pursuing their dreams. “I think that the bottom line is that people don’t believe in themselves as much as they should,” Bernz says. “What I see in artists like ourselves and Tech N9ne is that we believe in the world that we’ve created for ourselves. I believe that some of that blind faith needs to be there if you want to achieve anything in the music industry or any kind of artistic field.”

Part of believing in yourself includes the ability to and willingness to evolve. ¡Mayday!, for instance, changed its creative process while working on Believers. The group decided it wanted to make something that sounded like a summertime BBQ and sat with producer Infamous (Lil Wayne, Gym Class Heroes) before making the music for the cut. The result, “HighRide,” marked a new way ¡Mayday! could create music. “Since we were always kids with beat machines, we would just make something, vibe it out and then it would tell you what it is,” Bernz says. “This was the first time we really got to sit down with a producer and think about things, talk about things before we actually made the song. It was a new process for writing.”

Another writing wrinkle came from Tech N9ne. “One thing I learned from hanging out with Tech is that he definitely thinks about his show a lot when he’s making his albums and that is something we wanted to do with this album,” Bernz says. “A song like ‘Tear Shit Down’ is definitely something we wanted to play live and have fun to. We made this album coming off a 106-show tour, so our minds were literally still in the shows.”

At the hundreds of shows ¡Mayday! has performed throughout the years, they’ve crossed paths with hundreds of girls, ones who have seen it all and who served as the inspiration for the somber “Mortuary Mary.” While those girls may have become cynical about life, ¡Mayday! remains excited about its work. “We’re just sharpening the knife,” Bernz says. “In terms of the shows, we’re at a really high place in terms of how good they are and how we’re able to communicate with each other. On the music side, I feel like we’re getting better all the time.”

Before joining Strange Music, ¡Mayday! became a draw in Southern Florida and the Southeast because of its energetic shows and anthemic music, earning such A-list fans as Lil Wayne, who featured the group in his “Get A Life” and “Da Da Da” videos, and Cee Lo Green, with whom they collaborated on the Internet hit “Groundhog Day.” Upon joining Strange Music, the sextet released its debut album, Take Me To Your Leader, in March 2012. The group’s stellar instrumentation and its captivating blend of singing and rapping on such selections as the ominous “Badlands” with Tech N9ne, the stirring “Tango In Tunisia,” the edgy “Death March” and the eerie “Don’t Make Me Live” introduced ¡Mayday! on a national stage as a versatile, noteworthy group with thematic diversity and impressive musicianship.

Touring, recording and working with independent music powerhouses Tech N9ne and Strange Music also gave ¡Mayday! the keys to success. “Hard work, perseverance, consistency and quality -- that’s what I’ve learned the most from Tech,” Bernz says. “Strange has given us the blueprint for success. If you put all those things together and you can survive the other pitfalls of life, you’re probably going to come out the other end OK.”

¡Mayday! also released its Thrift Store Halos EP in August 2012 and Wrekonize released his The War Within LP in June 2013, all while touring virtually non-stop and collaborating with a bevy of artists. With Believers, ¡Mayday! plans to graduate to the next stage of its career. “This is the album where it’s time for us to move on from being that underground thing and into becoming something bigger,” Bernz says. “We’re going for the brass ring. I definitely think ¡Mayday! makes the kind of music that can be played everywhere. That’s our goal, to move past the underground status and go on to the next level, whatever that may be for us.”

One thing’s for sure. ¡Mayday!’s next level will include legions of new Believers